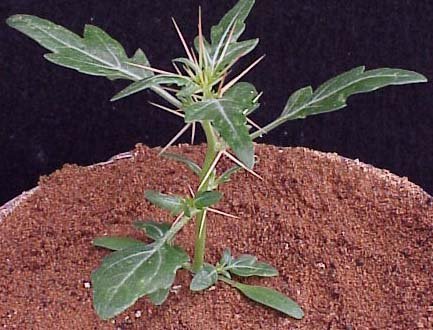 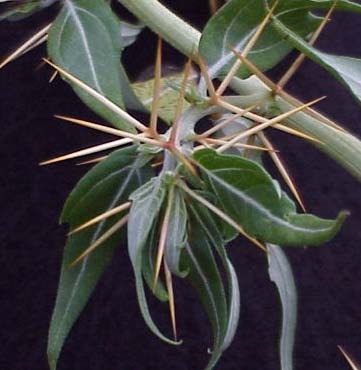 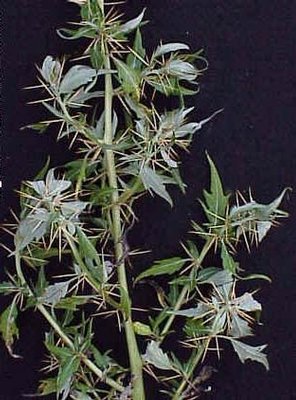 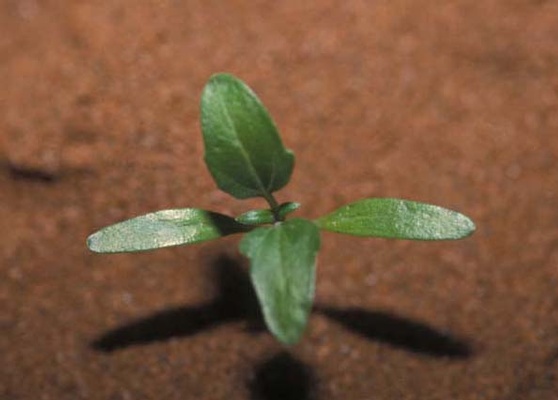 Weed Description
A summer annual with 3-parted spines that arise at the base of each leaf and the characteristic cocklebur fruit. Spiny cocklebur is found throughout the southern United States. It is primarily a weed of agronomic crops, nurseries, and pastures.

Seedlings
The stem below the cotyledons (hypocotyl) is purple at the base and often green in the upper portion. Cotyledons are linear to lanceolate in outline, waxy, smooth, fleshy, and thick.

Leaves
Arranged alternately along the stem, approximately 1 to 2 1/2 inches long, 5 to 25 mm wide. Leaves are lance-shaped in outline with irregular lobes or teeth along the margin. Leaves are without hairs above, but have many soft white hairs below and have conspicuous white veins on the upper leaf surfaces. Leaves occur on petioles that range from 1/4 to 1 inch in length. A very distinctive yellow 3-parted spine (1/2 to 1 inch long) occurs at the base of each leaf petiole.

Stems
Erect, branched, slender, hairy, reaching as much as 3 1/2 feet in height.

Flowers
Inconspicuous, greenish in color, arising from the area between the leaf petioles and the stems (axillary flowers) and at the ends of the erect stems (terminal flowers).

Fruit
An elliptic to egg-shaped two-chambered bur, 1/2 to 1 1/2 inches long and covered with hooked prickles. Each bur contains two seeds, one that grows during the first year and one that grows a year later.

Identifying Characteristics
The relatively large, linear to oblong waxy cotyledons helps to distinguish this weed from most other species when in the early stages of development. Additionally, the lance-shaped leaves, yellow 3-parted spines, and distinctive prickly cocklebur fruit are all features that help in the identification of this weed. Common Cocklebur (Xanthium strumarium) is a closely related and similar species, however, unlike spiny cocklebur, this weed does not have the very distinctive 3-parted spines that arise at the base of each leaf. This weed has also been confuse with Spiny Amaranth (Amaranthus spinosus), however the spines of this weed are not 3-parted as in spiny cocklebur.