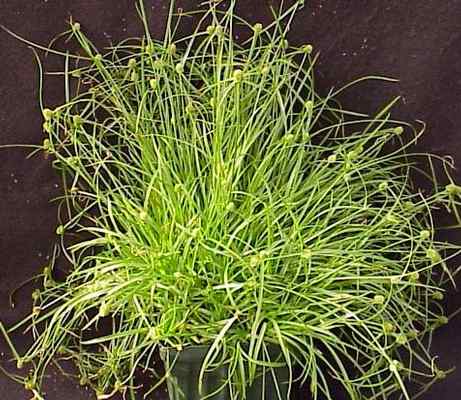 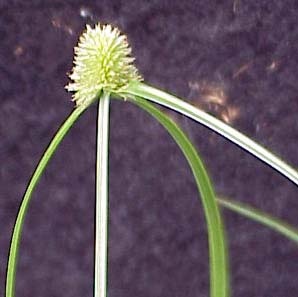 Weed Description
Perennial sedge from rhizomes that is capable of forming dense infestations. Green kyllinga is primarily a weed of turfgrass and lawns that is usually found in damp or wet areas. This weed may be found from Rhode Island south to Florida, and west to Texas.

Seedlings
Seedlings occur less often than plants that arise from rhizomes. Leaves do not have ligules or auricles and have a distinct ridge along the midvein, but are nevertheless often mistaken for grasses.

Leaves
Dark green in color and have a distinctly shiny appearance. Leaves have a distinct ridge along the midvein. Leaves are without hairs (glabrous) and no auricles or ligules are present. The leaves of green kyllinga taper gradually to a sharp point.

Stems
Three-sided and triangular in cross-section. Stems may reach 6 inches in height and produce a terminal seedhead.

Flowers
Round or oblong in outline, produced at the ends of the triangular stems. Three shorter leaves (bracts) usually occur just below the seedhead.

Roots
A dense system of rhizomes that are red to purple in color.

Identifying Characteristics
The shiny green ridged leaves and lack of ligule and auricles helps to distinguish this sedge from most grass weeds but green kyllinga seedlings or young plants can be easily mistaken for either Yellow Nutsedge (Cyperus esculentus), Purple Nutsedge (Cyperus rotundus), or Rice Flatsedge (Cyperus iria). However, green kyllinga lacks tubers unlike yellow or purple nutsedge, and rice flatsedge only has a fibrous root system, unlike any of the other species. Additionally, the three distinctive leaves below the seedhead of green kyllinga helps to distinguish this weed from either yellow or purple nutsedge.